Lab Quality Results at the Point of CarE 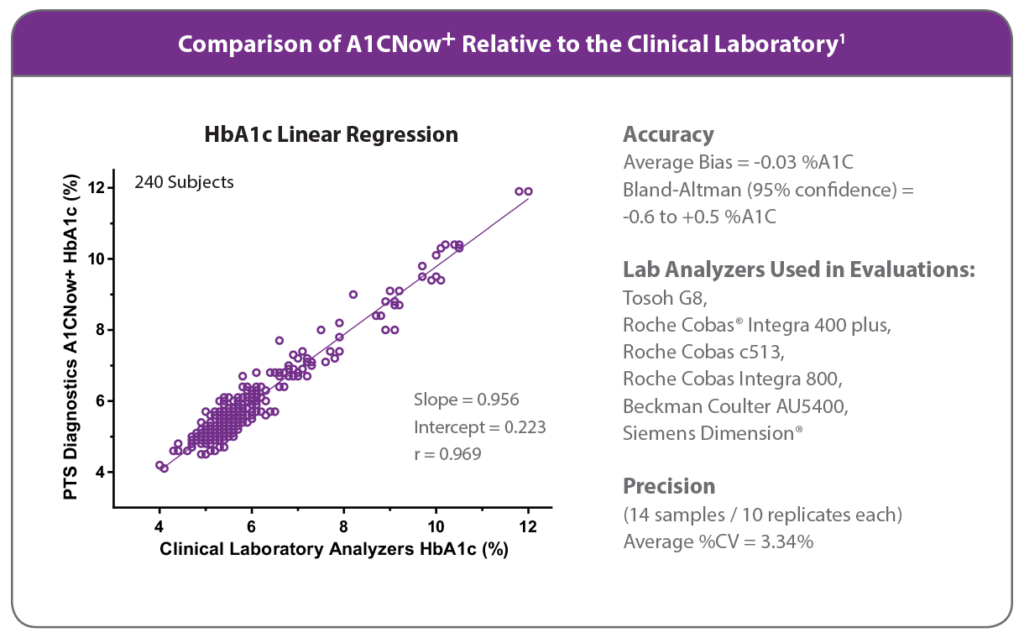 About A1CNow Accuracy and Performance

Is the A1CNow test system accurate?
Accuracy refers to the closeness of agreement between the measured value and the “true” value. Accuracy studies were conducted with 189 subjects with and without diabetes across three US sites. Fingerstick sampling was performed on each subject for testing with A1CNow+, and venous blood was collected from each subject for comparative testing using an NGSP-certified method. A1CNow+ results were compared to the NGSP reference results. The A1C results ranged from 5.0 % A1C to 12.8 % A1C, with a mean of 7.3 % A1C (reference results). Data analysis consisted of least squares linear regression (x = reference results), bias calculation, and Bland Altman limits. The data are provided below.1

(NGSP-certified method is the Tosoh A1C 2.2 Plus)

The results showed that the accuracy of A1CNow+, with fingerstick samples was, on average, 99%. This means that, on average, a true 7.0% A1C could read approximately 6.9% A1C. An individual A1CNow+ result may differ by as much as -1.0% A1C to +0.8% A1C from the true result. This represents the 95% confidence limits of a Bland-Altman plot.2

(NGSP-Certified method is the Tosoh A1C 2.2 Plus)

Venous blood was collected from 110 diabetic subjects, and each sample was tested on one of three different lots. Aliquots of the venous samples were also tested by the NGSP-certified method, providing comparative results. Data analysis again consisted of least squares linear regression (x = reference results), bias calculation, and Bland-Altman limits. The data are provided below.

The results showed that the accuracy with venous sampling was, on average, 99.7%. An individual result may differ by -0.8% A1C to +0.7% A1C from the true result. This represents the 95% confidence limits of the Bland-Altman plot. A1CNow+ may be used with either fingerstick (capillary) or venous (heparin-anticoagulated) whole blood samples.1

Is the A1CNow test system precise?

Precision is the quality of being repeatable in amount or performance. Precision of a test is observed when measurement of a sample has nearly the same value each time it is measured. Precision testing was done under a specialized protocol. Following this protocol, two whole blood samples, one of approximately 6.0% A1C (low), and one of approximately 9.0% A1C (high), were tested over 20 days and four runs per day, for a total of 80 assays per level. The overall imprecision (including within-day and between-day) was 3.00% CV at the low level and 4.02% CV at the high level.1

What is the National Glycohemoglobin Standardization Program (NGSP) certification?

The purpose of the NGSP is to standardize Hemoglobin A1C test results to those of the Diabetes Control and Complications Trial (DCCT) and United Kingdom Prospective Diabetes Study (UKPDS) which established the direct relationships between HbA1c levels and outcome risks in patients with diabetes.

How does an A1C testing method become NGSP-certified?

How does an A1C testing system become IFCC-traceable?

A1CNow test systems are IFCC-traceable. The relationship between the National Glycohemoglobin Standardization Program (NGSP) A1C calibration (expressed as % A1C) and the International Federation of Clinical Chemistry (IFCC) network calibration (expressed as mmol/mol) has been shown to be stable and is given by the master equation: (NGSP = [0.09148 * IFCC] + 2.152). For further details and additional references, see the NGSP website at http://www.ngsp.org/.Since A1CNow test systems are NGSP-certified results can be converted to IFCC units with the master equation.

Demonstrating IFCC traceability is a formal process during which A1C blood samples are assigned values by the IFCC network. Manufacturers use these samples to verify alignment of their assay with the IFCC network.

Why do I sometimes see differences in A1C results of the same blood sample when tested on the same A1C device?

There will always be differences between multiple test results due to normal variation, time between tests, and differences between methods. In fact, duplicate test results from the same patient will rarely match even when the test is performed using the same method at the same time. Differences can sometimes appear greater because one result could be slightly higher and the other could be slightly lower than the reference (true) value. Positive and negative biases are often present in all of the most frequently used A1C testing methods. Multiple A1C methods should not be used to evaluate a
single patient or the performance of an A1C testing device because large and sometimes unacceptable inter-method differences are possible when multiple A1C testing devices are used for an individual patient.1

What are hemoglobin variants?

While in most people Hemoglobin A accounts for 95 to 98% of their hemoglobin, some individuals have genetic variations (such as Hemoglobin S or Hemoglobin F) that could affect the accuracy of a HbA1c test.

Not all products shown on this website may be approved in all regulatory jurisdictions. Consult with your local sales representative, distribution company or PTS Diagnostics customer support for details.